Aloe ferox is a species of aloe that is endemic to South Africa. This HolisticZine write-up provides information on the uses, benefits, and side effects of aloe ferox.

Aloe ferox is a species of aloe that is endemic to South Africa. This HolisticZine write-up provides information on the uses, benefits, and side effects of aloe ferox.

Founded in 1981, the International Aloe Science Council (IASC) provides seals of quality and certifications to aloe products that meet high standards. According to the IASC, products that don’t contain a polysaccharide called acemannan should not be considered true aloe vera.

More than 400 species of succulent plants are placed under the Aloe genus. Aloe vera is one of the popular species that is cultivated due to its therapeutic properties. Being a succulent plant, it stores water in its leaves. This makes this plant ideal for dry or arid environment. Its popularity has increased manifold due to the therapeutic nature of the gel and latex obtained from the plant.

The gel is a clear, jelly-like substance that is obtained from the parenchymal cells of the leaf, which is the white inner fleshy part in the center of the leaf. The latex is a bitter, yellow-colored liquid that is extracted from beneath the leaf skin. Thus, the products that are made from whole leaves contain both gel and latex. Aloe gel that has not been processed might also contain some latex. It must be noted that aloe gel or juice is used as a skin care product, whereas the latex is mainly used as a stimulant laxative.

Out of the 400 species placed in this genus, only three species are known for their medicinal properties. These are Aloe vera, Aloe ferox, and Aloe arborescens. One of the major differences between these three species is the concentration of aloin. Aloe ferox, which is also called cape aloe, red aloe, or bitter aloe, is considered to be more potent than aloe vera; the amino acid content of the former is almost double than that of the latter. In the following sections, you will find information on the medicinal uses of cape aloe, along with the differences between aloe vera and cape aloe.

The term ferox, which means ‘fierce or war-like’, refers to the spiny-edged leaves of this plant. Aloe ferox is also called bitter aloe due to the bitter taste of its sap. It is referred to as red aloe due to the reddish-orange color of its flowers. In late 1980s, certain tests were conducted at Kirstenbosch National Botanical Garden in Cape Town, South Africa for understanding the nutrient profile of aloe ferox and aloe vera. These tests revealed that: 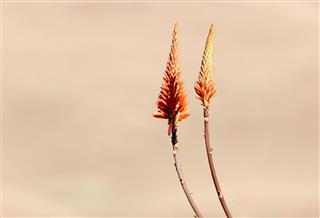 Thus, this study hinted that aloe ferox was more potent than aloe vera.

The bitter taste of aloe ferox is due to the increased concentration of aloin. Aloin is present in the bitter sap that is present under the green epidermis of the leaves. The sap is sold in the form of powders, crystals, tablets, or capsules. The gel that is extracted from the leaves is mostly used for skin. Unfiltered aloe contains about 10,000 parts per million of aloin. It also contains several phytonutrients that are responsible for its therapeutic properties.

Side Effects of Cape Aloe

Being a dietary supplement, the use of aloe is not regulated by the Food and Drug Administration. However, the FDA has approved its use as a food additive. Thus, it is extremely essential to prevent the indiscriminate use of aloe products. Since aloin is a potent stimulant laxative, it should not be taken in large doses. When taken in large doses, aloin can cause side effects such as:

It is advisable to use herbal products such as aloe vera or aloe ferox only after consulting with the doctor. This is to rule out adverse interactions or side effects. Excessive use of stimulant laxatives like aloe ferox should be avoided, as products with a larger concentration of aloin can cause untoward effects. These should not be used for more than two weeks. Since aloin can cause uterine contractions, its use is not advised during pregnancy. It should not be taken by nursing mothers. It is advisable not to give aloe ferox to children below the age of 12 years.

The therapeutic properties of aloe ferox plant have been known for ages. Since it is endemic to parts of South Africa, it has been listed on Appendix II of the Convention on International Trade in Endangered Species (CITES) to prevent the commercial exploitation of aloe ferox for latex. This is to ensure that the harvesting of this plant for international trade is carefully monitored, thereby ensuring that there isn’t any threat to the survival of this species in the future.