Rooibos tea, otherwise known as red bush tea has several benefits of which we all are aware of. But, it has some side effects as well and the following article is meant to deal with those side effects. Keep reading to know about rooibos tea side effects.

Rooibos tea, otherwise known as red bush tea has several benefits of which we all are aware of. But, it has some side effects as well and the following article is meant to deal with those side effects. Keep reading to know about rooibos tea side effects. 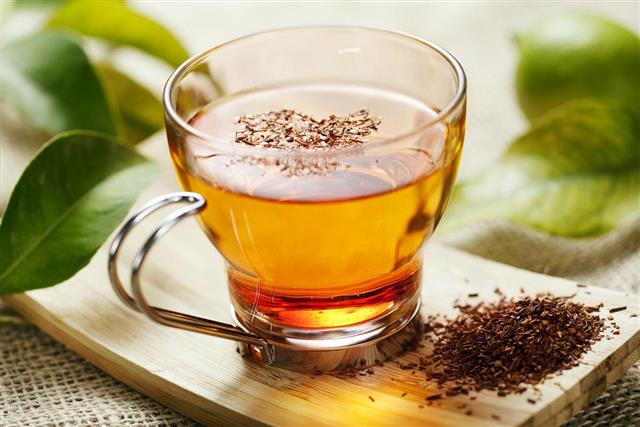 The scientific name for rooibos is Aspalathus linearis and it is primarily known for several of its health benefits. The name linearis comes from the linear growth of the plant and the needle-shaped leaves. It usually grows in the remote South African region called the Western Cape Province and goes through the process of fermentation where the green rooibos leaves are finely chopped and left to ferment in large heaps. Then it is dried in the sun where the green leaves change their color to a deep red which is loved by the consumers. The natives prefer drinking rooibos tea without milk but with a lemon slice, sugar or honey to sweeten. The required amount of sugar or honey is very less because the tea is supposed to be naturally sweet. The method of preparing rooibos tea is the same as that of black tea which is a very common one.

Side Effects of Rooibos Tea

Unfortunately, there is no such research that shows the exact side effects of the tea or the exact benefits. Hence, it is advisable to concern your health care provider before consuming rooibos tea. Following are some of the concerns related to the consumption of rooibos tea.

Slow Absorption of Iron in Food

Like the black tea, rooibos also has a very low level of tannin which is responsible to slow down the iron absorption in the food consumed. The problem is more noticeable with the people who have iron deficiencies. The intake of rooibos tea alongside the meal decreases your body’s capacity to absorb iron from the food because of the tannin level. Foods like red meat, fish and chicken do not decrease the amount of iron that the body receives whereas, the iron in plant foods is difficult to absorb by the body when consumed in combination with rooibos tea. As I have said earlier, people with iron deficiency should consult their family doctor before including rooibos tea into their daily diet and they can also take the tea in between the meals instead of consuming it along with the food.

There are no evidences that show these problems but some people may face any of them. Skin irritation can be the result of specific allergy to the red bush tea or the active ingredients present in the product form. Itchy skin patches, swollen skin, redness and skin rash are the common symptoms visible after the consumption of the tea. Stop the intake immediately if you notice such symptoms and visit the doctor. Breathing can be one of the major problems caused due to the over dose of rooibos tea. It can present itself in the form of chest pain, shortness of breath, swollen chest and chest tightness. These side effects can be the result of allergy either due to rooibos tea or to the ingredients of the tea. If you find any of these symptoms after drinking the tea, stop the dosage immediately and consult a doctor.

It is a good substitute for coffee because it is absolutely caffeine free and the would-be-mothers are expected to limit their caffeine consumption. It can be beneficial in case of constipation, nausea and stomach cramps. It can also treat anxiety and depression. Since anemia is frequent during pregnancy and breastfeeding, low tannin level can be beneficial in such a situation. There are only two important things to be taken into consideration, one is that sometimes, rooibos is mixed with other herbs which can cause serious side effects to the pregnant woman and secondly the supplement taken by the expectant mother is passed on to the unborn child which may be harmful. So, as a formality, consult your health care provider before adding rooibos tea in your diet.

There is no scientific research done on side effects of rooibos tea in children. Rather, absence of caffeine in the tea actually makes it healthier for children. The only concern would be the tannin content in it because tannin lowers down the absorption of iron and other nutrients from food consumed by children. If you want to include rooibos tea in your child’s diet please consult your doctor. As I have said before, health benefits of rooibos tea are more than the side effects. If you keep in mind the above concern and follow the correct dosage, you and your children won’t be affected negatively by the consumption of rooibos tea.

Disclaimer: The concerns mentioned above are just possible side effects one should be aware of before adding rooibos tea to one’s diet. This HolisticZine article is for informative purposes only and does not, in any way, intend to replace the advice of a medical expert.