The Birthstone of February: The Meaning, History, and Benefits of Amethyst

Deriving its name from the Greek word 'amethystos', which translates as "not drunken or not intoxicating," amethyst was revered by our ancestors for its ability to protect one from becoming too inebriated as well as help one overcome the influences of their passions.

Home / Uncategorized / The Birthstone of February: The Meaning, History, and Benefits of Amethyst 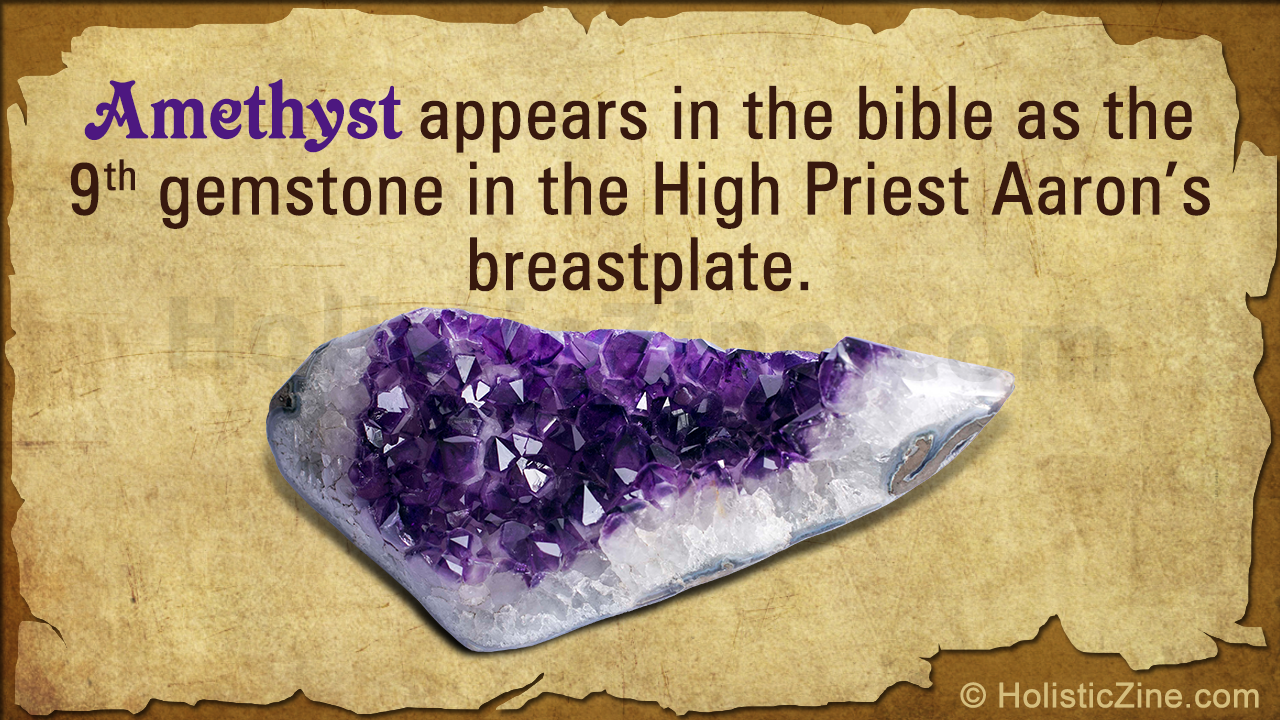 Deriving its name from the Greek word ‘amethystos’, which translates as "not drunken or not intoxicating," amethyst was revered by our ancestors for its ability to protect one from becoming too inebriated as well as help one overcome the influences of their passions.

Revered for centuries for its light pinkish to deep purple beauty, it seems fitting that the origin of the word “amethyst” is derived from its hue. Its etymology goes all the way back to the Greek word amethystos, which translates as “not drunken or not intoxicating.” When you break the word apart you get: a for “not,” methyskein for “make drunk,” and methys for “wine”. It was believed that when wearing this stone, it would prevent one from feeling the sensations of drunkenness. This was in part due to how its color resembled the color of wine.

Amethyst is derived from the Greek word amethystos, which which means “not drunken or not intoxicating.” It was believed to protect one from becoming too drunk, gaining its association with intoxication due to its purple color that resembles wine.

Amethyst is a gem variety of quartz. The two most important locations where it’s mined today include Brazil and Uruguay. Ancient man used it for decorative purposes nearly 25,000 years ago.

Due to the rarity of purple dye, the color purple became the color of royalty, making amethyst the gemstone of kings and queens. Amethyst appears in the bible as the 9th gemstone in High Priest Aaron’s plate, and appears in the Egyptian and other Eastern cultures.

Amethyst is one of the most popular gemstones used in rosaries for its ability to calm a user during meditation and prayer. It works best with the Crown and Third Eye Chakras. It is believed to help one gain access to the divine as well as promote greater spiritual cognition. 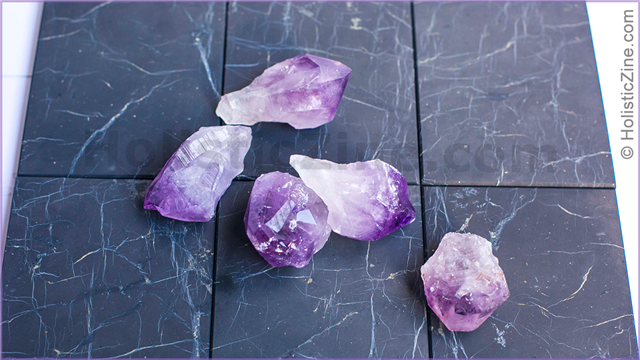 Amethyst is a gem variety of quartz. The most commercially valuable occurrences of amethyst are in volcanic rocks. The first step in the process of its formation begins with gas cavities forming in lava, which is typically formed from bubbles. As the lava hardens, these cavities remain intact and fill up with liquid that contains iron. Over time, this liquid turns into amethyst.

The most important deposits of amethysts currently being mined in the world are located in Brazil and Uruguay. Other locations where amethyst is mined include Canada, France, India, Madagascar, Mexico, Myanmar, Namibia, Russia, South Africa, Sri Lanka, Tanzania, and the United States. For the latter, the only commercially run amethyst mine in the United States is at the Four Peaks Mine in Arizona. It is believed that Native Americans knew about these deposits because amethyst arrowheads have been found in the area. Spanish explorers were also aware of this mine, and it is believed that some of the amethysts in the Spanish crown may have come from this location. 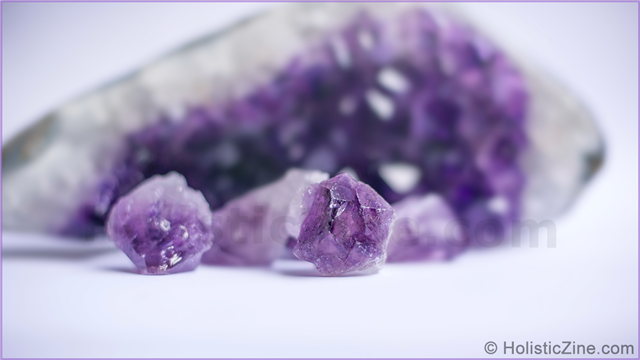 The earliest findings of amethyst date back to 25,000 years ago. It was found in France as a decorative tool used by prehistoric humans. It has also been found amongst the remains of the Neolithic man. This has earned it a place as one of the earliest known gemstones that man discovered.

As we know from the etymology of Amethyst, it was revered by the Greeks, and also by the Ancient Egyptians. In fact, it has been said that Cleopatra wore a signet ring with an amethyst in it. The ring had an engraving of the Persian God Mithras, who represents the divine idea, the source of light, and life. 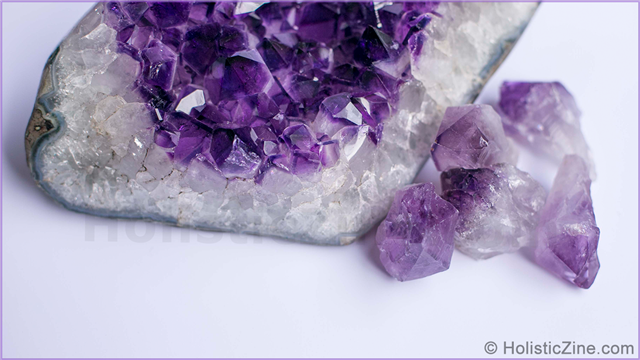 Amethyst is one of the twelve gemstones in High Priest Aaron’s breastplate. They have been placed in bishop’s rings, and have been used by royalty. Due to the rarity of purple dye, this contributed to the color becoming the color of royalty, and as such, made amethyst the primary gem for use in crowns and was worn by kings and queens in the form of jewelry. It is known that the Russian Empress Catherine had an affinity for this gem, and had lots of jewelry set with this stone.

Although it has been passed off as a classical story, the Greek folklore tale involving the god of wine, Bacchus was actually written during the Renaissance by French poet Remy Belleau in 1576 in the form of a poem on gemstone beliefs. The story goes that a beautiful maiden named Amethyst was on her way to the Temple of Diana. Unfortunately, she crossed paths with Bacchus, who was recently slighted and vowed to take his revenge upon the next person he came across. He unleashed his two guardian tigers upon her. As the beasts were barreling down upon her, Diana intervened, turning Amethyst into a clear, pure stone to spare her from that ill fate. Immediately after that, Bacchus felt remorseful, and to atone for his actions, he poured wine over Amethyst, changing her hue from clear to a deep purple, lending her name to the gemstone.

Uses and Benefits of Amethyst

The Romans and Greeks believed in the protection that amethyst gave to an individual. As mentioned previously, it was believed that amethyst would help prevent one from becoming overly drunk and keep one sober. It also staved off one’s passion so that they would not become consumed. That is why the Romans and Greeks set amethysts in their drinking goblets. Catholic priests also believed in its protective powers and would wear rings with amethysts set in them to defend against mystical intoxication. This kept them grounded spiritually, and any person who kissed the ring was believed to benefit from the protection of amethyst.

The gem also has certain spiritual uses that have been noted since ancient times. It is the ninth stone in the breastplate of the High Priest, which appears in the Bible. It appears in the Egyptian Book of the Dead and was used to carve heart-shaped amulets to be buried with the dead. In Eastern cultures, it has appeared in the form of sacred cities made from gemstones and was used for certain religious practices. It is one of the most popular gemstones for rosaries as it is believed to help the user focus and become calm while meditating. 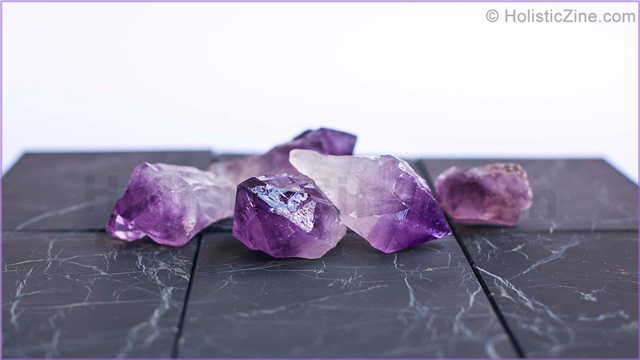 “Chakra” is a Sanskrit word for wheel or disk. In meditation, this is referring to the wheels or disks of energy that flow throughout the body. There are seven Chakras that align from the crown of the head down to the base of the spine. There are two main Chakras that an amethyst can activate – the Crown Chakra (7th) and the Third Eye Chakra (6th).

Amethyst works well with the Crown Chakra for its ability to help one gain easier access to the divine. It enhances one’s spiritual consciousness, influencing a higher state of spiritual wisdom and awareness. It helps foster energy between the energy bodies, as well as heal holes in one’s aura by siphoning in divine energy.

Amethyst is also a great conduit between the physical plane and the higher realm, connecting the two together. It promotes peaceful energy that one can tap into so they can find the inner calm to meditate. It helps one overcome stress, and strengthens the spiritual connection of the meditator, transforming all negative energy into love energy. 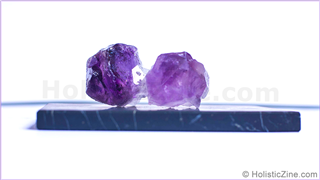 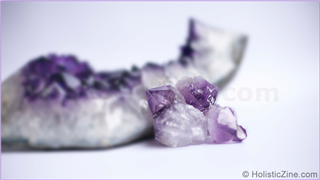 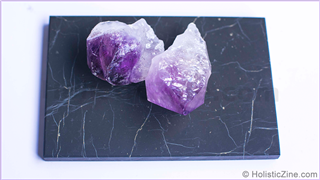 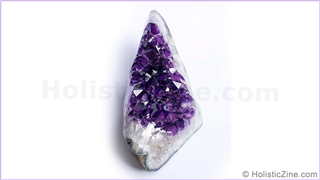 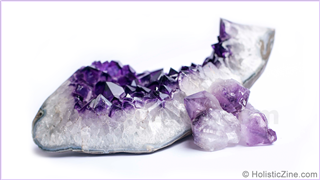 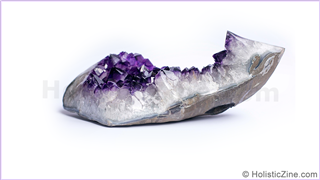 Disclaimer: The information provided here is for entertainment and reference purposes only. It is based on centuries of folklore, most of which came about before the age of modern medicine. It is not meant as actual medical information. For advice about any of the illnesses listed, please visit a qualified physician.